On the 1st July 1865 railway line from Compstall to Marple and New Mills was opened. Various engineering problems had delayed the construction.

As Victoria’s reign neared its end, the numbers of visitors to Marple increased.  In 1884, a newspaper reported that

“Marple Station was greatly thronged on Good Friday…between two and three thousand visited the place by ordinary and special train”. 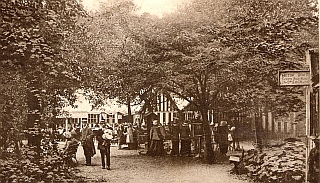 at their front doors, farmers opened their fields for picnics.  On a Saturday in June 1896, 3000 visitors came from Oldham alone and, according to a newspaper report,more than 20,000 people visited Marple Bridge on Good Friday,1933. The destruction of Mellor Mill had led to the biggest attraction.

At Christmas 1892, Edwin Furness, who had been manager of the mill, sat in the parlour of his home at Strawberry Hill,with his brother, who was Chairman of Ardwick AFC, which had that year become a founder member of the Football League and two years later would become Manchester City.

“What shall I do now?  We’ll soon have cleared up what we can at the mill.  Mr Arkwright won’t want me after Easter.”

“I’ve been thinking about that.  You know, pleasure parks are becoming popular.  Couldn’t you have one here?”

“Well, maybe!  I suppose we could use the millponds for boating.”

“You need a good name.  Why not call them the Roman Lakes.  People aren’t to know that they weren’t dug by the Romans.”

“I think Arkwright would lease me the land.  It’s not worth much.” 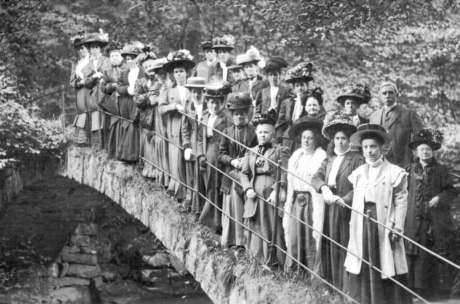 the Roman Bridge. The Park prospered. In 1867 the estate was up for sale, by the Arkwright family. This did not succeed. The Furniss family,acting as agents for the Arkwrights, first leased and then purchased the grounds and established the Roman Lakes Company Ltd. People headed for the Roman Lakes to listen to the band, join the dance, row on the lake and play on the slot machines. In winter with the water level lowered, ice skating could be enjoyed on those freezing days.

A resident of Hyde recalled in 1983

“the happy memories of those halcyon days before the last war, which I spent in Marple Bridge and the surrounding countryside…On Sundays, thousands of day trippers arrived in Marple all bound for the Roman Lakes where they picnicked in the nearby fields, and rowed on the Lake, and spent their pennies in the slot machines..”

s, as buses and cars made it easier to go further into the countryside and cinemas provided entertainment in the towns, the popularity declined, but revived during the Second World War when cars were deprived of petrol.  Boating reached a high point of 68 rowing and motor boats, but its demise was caused by the conflict of the needs of anglers, enjoying the enrichment of the lakes waters by coarse fish, and the oarsmen.The decision made led to the end of an era of summer boat trips. Bands, dancing and slot machines have gone but the present owners, the Sewarts, continue to run the Leisure Park, with an income from fishing and sale of refreshments and a welcome for walkers and cyclists. In the early days of their ownership, in the first years of the 1950’s, the site was a prime destination for vandals and thieves, with the latter’s targets being the penny slot machines and stocks of tobacco and cigarettes. Sydney Sewart, Bernard Sewart’s father, finally resorted to sleeping onsite, despite his early 4am opening time. With the strong support of Bernard Sewart as chairman and Rachel as secretary, the newly formed Friends of our Valley are enhancing the opportunities to enjoy the beauty of this section of the River Goyt and its wildlife.

Roman Lake and beyond album on  marple-uk virtual tour